Kitchen Garden Gurus – It’s all about the corn!

We love Sweetcorn at THE PIG and Mirai, one of the sweetest, most tender and flavourful corn,  has been one of our favourites for a number of years now. At THE PIG, New Forest we have had a really great crop this year despite the weather not being on our side!

Did you know sweetcorn is most successful in long hot summers? Sweetcorn can be sown inside or outside but ensuring the temperatures are correct is very important. To sow indoors the best temperature is 18-21 degrees from mid-April to early May in seed trays or deep pots at a depth of 2.5cm. To sow sweetcorn outside it is best to do so in late spring, as soil or compost temperatures need to be above 10 degrees. 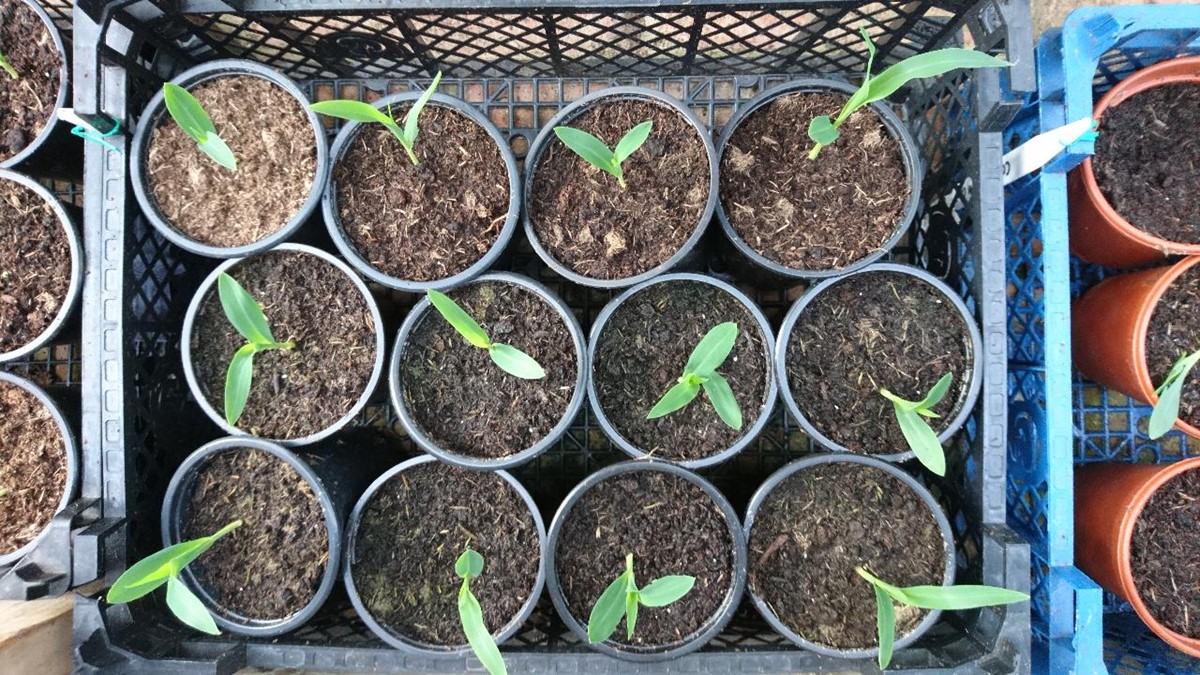 Sweetcorn is a very easy crop to grow and this year we planted three varieties of Mirai: white, 103 and 003; these were sown back in early April. One seed was sown into each 3-inch pot and placed in our greenhouse until all threats of frost had passed; the sweetcorn was moved outside on May 20th.

Frost damage is a common issue when planting out sweetcorn as people are too eager to get crops in the ground come spring. Patience is a virtue here! So, if you are growing your own sweetcorn at home, be sure to keep the seedlings in a greenhouse or on a windowsill until it is warm enough to harden them off outside before planting them out.

Planted out in the final days of May we placed a few rambling courgette varieties underneath the corn, in order to suppress weed growth, and incorporated a climbing bean in too to complete the three sisters. Interestingly we had a lovely American guest staying with us who was delighted to see this method being used as it took him back to gardening with his native American grandmother when he was a child.

The sweetcorn started to harvest at the beginning of August once the silks at the point of the cob started to go dry and brown. Harvesting sweetcorn usually takes about 21 days from when the silks first emerge. A tip for knowing if they are ready is to peel back the wrappings on a cob and pierce a kernel with your nail to see if they are ready. 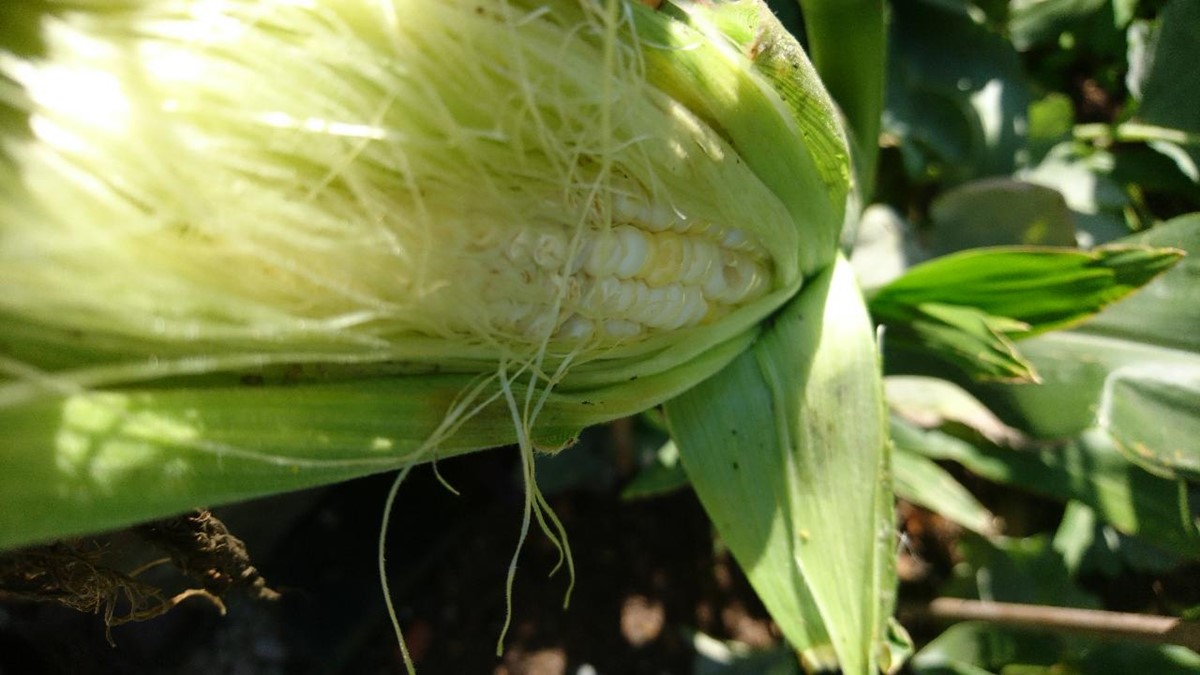 As we all know the weather is uncontrollable and can cause problems when you are growing your own vegetables. In the second week of August a heavy wind and thunderstorm damaged a lot of the corn; it was laid flat and the roots had been disturbed. Fortunately for us, the sweetcorn had ripened enough meaning we could harvest what was left. We stood the corn up and staked them upright against 3ft canes until we could finish harvesting them – yay!

(This was the damaged corn!) 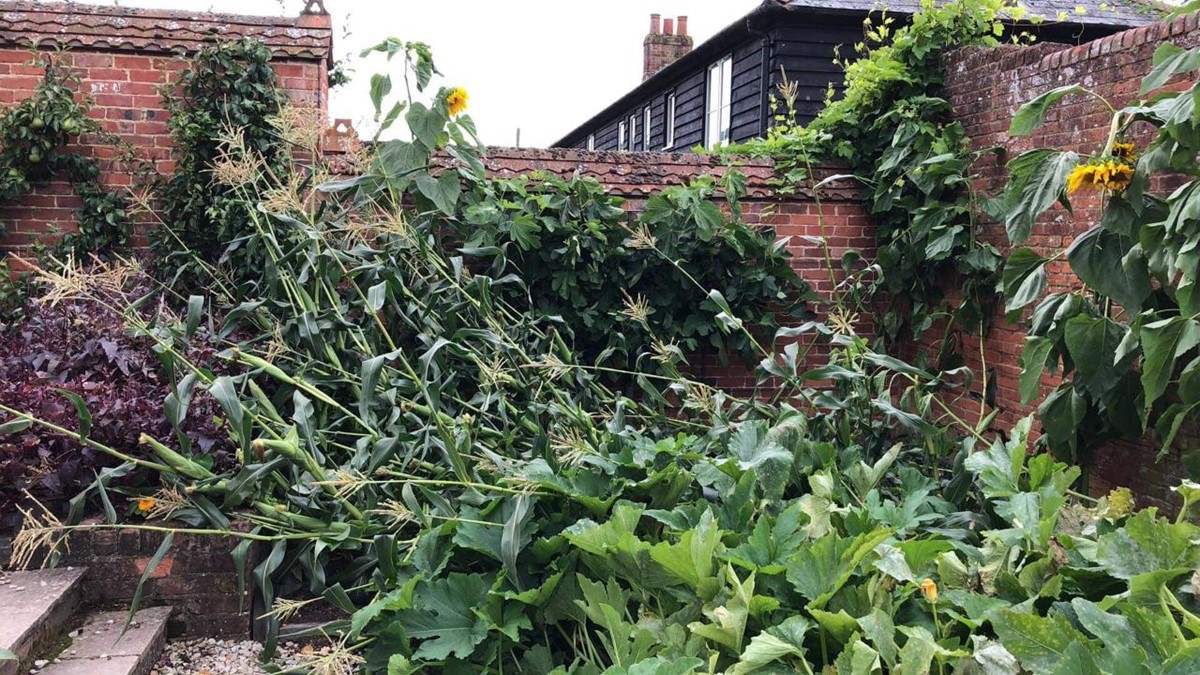 We did not let the weather get the better of us and the corn turned out amazingly well despite the bad storm.

Two dishes on the menu that contained our sweetcorn were our smoked pork belly with chard, sweetcorn, nasturtium pesto and pickled shallots, and also the roasted pink roscoff onions and lavender from the courtyard with a vegan salad cream, pickled parcel and flaked almonds. 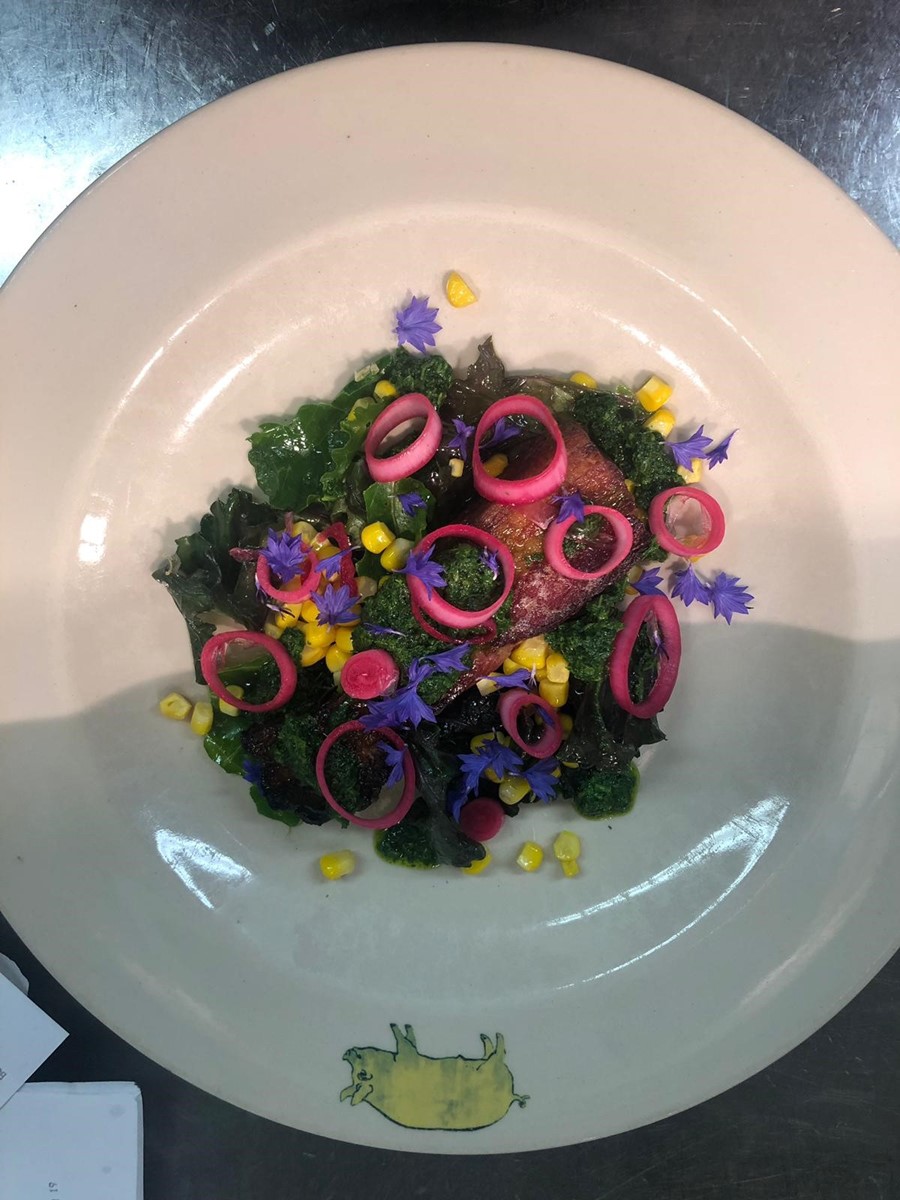 Colin, Emma and Rafal – Kitchen Gardeners at THE PIG.

THE PIG way of life is all about growing and eating good food. Sweetcorn is just one of the many crops grown here at THE PIG. If you have been inspired by our sweetcorn tips and want to grow your own vegetables at home our PIG book has many more brilliant kitchen garden tips, available to purchase in any PIG hotel or here.